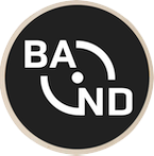 BAND Royalty’s goal is to evolve the music industry.

BAND Royalty’s goal is to evolve the music industry by decentralizing distribution and allowing fans, performers, songwriters, and all stakeholders to connect at an industry level. This can directly assist musicians, publishers, producers, and writers in improving their music rights management and monetization using as foundation a blockchain platform that provides a complete ecosystem of capabilities to give the power back to music creatives and their fans at the business layer of the music industry.

BAND Royalty is a new blockchain platform that works with all creative stakeholders in the music industry while simultaneously opening up the sector to the new possibilities that decentralized blockchain can bring. To this end, BAND Royalty sees the potential for how every “play of a song” can be recorded as unique transactions on the blockchain. With this in mind, it is possible to use cryptographically-secured tokens as the means to carry out operations associated with the registration of original music, and the verification and transfer of ownership rights over music included in a catalog, as well as the selling, purchasing, and lending of the rights and benefits that come from licensing them out to other parties.

BAND Royalty kicked off 2021 with the purchase of a remarkable collection of performance music royalties, including songs performed by Beyonce, Jay-Z, Justin Timberlake, Timbaland, Missy Elliott, and over a dozen other platinum-selling artists. Then in Q2 of 2021, BAND Royalty launched a series of collector NFTs. These collector NFTs were designed as a celebration of music across multiple genres and diverse people. To date, artistic NFTs similar to this have had little utility outside of the subjective art appreciation realm. BAND Royalty decided to add utility to these artistic NFTs by allowing the NFTs to be incorporated directly into the BAND music platform ecosystem at any time and reward the NFT holders in unique ways. This innovation enabled BAND to grow an audience of music lovers, fans, and enthusiasts to over 70 thousand community members within a few months, between Twitter and Telegram, all participating at different levels across the BAND Royalty community. Within our growing BAND Royalty community, the first series of a strictly limited edition set of NFTs was launched, inviting fans to participate at a whole new level in their love of music, where they could now access rewards based on music royalties from songs performed by some of their favorite artists.

From the outset, the purchase of the music royalties catalog was made within the design of a new and unique model of NFT music staking pools, where BAND Royalty club members (Music Mogul Club, or MMC) would be able to benefit from staking and being rewarded as a reflection of the worldwide royalties from the tracks in the BAND catalog. This launch opened access to the Music Mogul Club through ownership of one of these BAND Royalty NFTs.